Spiritual discourse on the Bhagavad Gita

The YSDK Coimbatore Kendra was happy to host a series of talks on the Bhagavad Gita from the book ‘God talks with Arjuna’ by Sri Paramahansa Yogananda at the SSVM School of Excellence by Sw. Suddhananda Giri. The school auditorium is quite spacious with a fully equipped stage and can accommodate up to 300 guests. The lectures were attended by about 200 guests and was very inspiring and well received.

The sublime teachings of Lord Krishna are enshrined in the Bhagavad Gita. In his highly acclaimed two-volume commentary on the Gita, Paramahansa Yogananda has written:

The topics for the discourse were:

The Pandavas and Kauravas within us: who is Righteous? on Saturday, 30th December

The program was scheduled from 5-6.30 PM with heart-touching bhajans by the devotees from 5-5.30 pm followed by Swamiji’s talk for an hour. A devotee introduced Swami Suddhanandaji as a man of deep scientific insight, as before renunciation, he worked in one of the premier research establishments of India, the Bhabha Atomic Research centre, Mumbai, after graduating in Electrical Engineering from IIT, Madras, Chennai.

Swamiji opened his talk about the symbolism of the characters in the Mahabharata that becomes evident when we read through the commentary on the Bhagavad Gita. Dhritharashtra, the blind king of the Kauravas represents the human mind, the subconscious mind, his wife Gandhari represents the decision-making intellect or the rational mind, while their eldest son, Duryodhana represents the human ego.

The battle of Kurukshetra is therefore, the timeless battle in our minds between our degrading tendencies, the Kauravas and our uplifting tendencies, the Pandavas and how to overcome this battle. He also explained how Yoga starts working from the internal environment to the external – by resolving conflicts in the mind and raising the consciousness of the individual to enable one to maintain peace in the midst of turbulence.

Swamiji talked about how it was possible through a definite path – if followed properly and sincerely – to bring about the changes and conditions that one desires. He gave the example of the spiritual path given by Gurudeva Sri Sri Paramahansa Yoganandaji which helps in achieving the goal of a peaceful, happy and joyous existence in this turbulent world. He touched upon the benefits of practicing the various techniques given by Guruji and how each one of them contributes to the fulfilment of this goal.

Finally he mentioned how the technique of Kriya Yoga helps in rewiring the brain circuitry, and brings about the internal transformation one desires. Swamiji mentioned to the attendees that this technique of meditation is the highest technique known to man in his quest for Self-Realization. He also emphasized the importance of Bhakti or Devotion to God as Krishna has said “But, O Arjuna, those whose minds are absorbed in me in total faith and who are engaged in devotional service unto me, for them I give deliverance from the cycle of birth and death.”

The session ended with vote of thanks and we also organized a small book stall and a new member registration desk outside the auditorium that received good response. 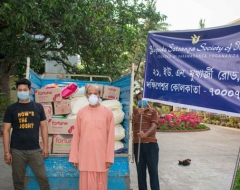 Thank You for Your Love, Support, and Prayers

Thank You for Your Love, Support, and Prayers...
Read More 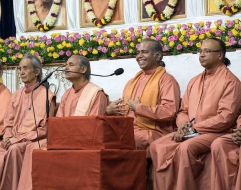